Five most largest and famous DDoS attacks in history 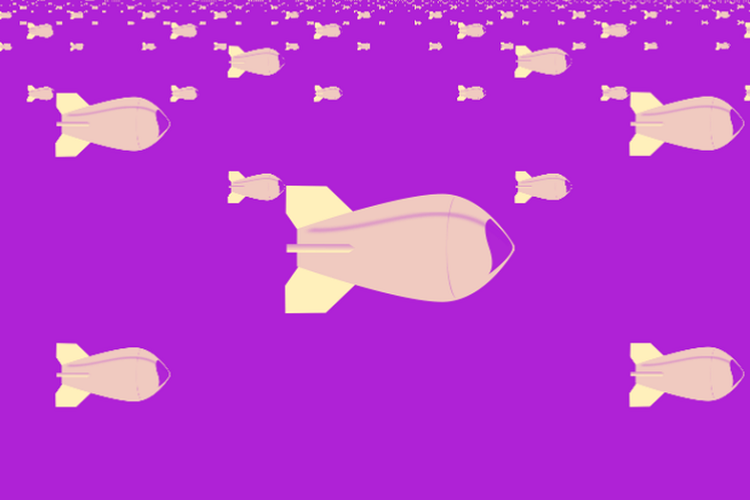 Distributed Denial of Service (DDoS) attacks are now everyday occurrences. Whether you’re a small non-profit or a huge multinational conglomerate, your online services—email, websites, anything that faces the internet—can be slowed or completely stopped by a DDoS attack. Moreover, DDoS attacks are sometimes used to distract your cybersecurity operations while other criminal activity, such as data theft or network infiltration, is underway.

The first known Distributed Denial of Service attack occurred in 1996 when Panix, now one of the oldest internet service providers, was knocked offline for several days by a SYN flood, a technique that has become a classic DDoS attack. Over the next few years, DDoS attacks will become common and Cisco predicts that the total number of DDoS attacks will double from the 7.9 million seen in 2018 to something over 15 million by 2023. 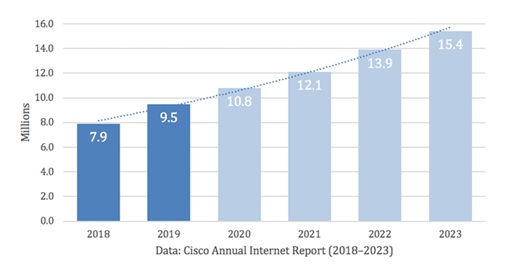 But it’s not just the number of DDoS attacks that are increasing; as the bad guys are creating ever bigger botnets – the term for the armies of hacked devices that are used to generate DDoS traffic. As the botnets get bigger, the scale of DDoS attacks is also increasing. A Distributed Denial of Service attack of one gigabit per second is enough to knock most organizations off the internet but we’re now seeing peak attack sizes in excess of one terabit per second generated by hundreds of thousands or even millions of suborned devices.

The Cost of DDoS Attacks

Given that IT services downtime costs companies anywhere from USD 300,000 to over USD 1,000,000 per hour, you can see that the financial hit from even a short DDoS attack could seriously damage your bottom line.

The Top-Five Most Famous DDoS Attacks (for Now)

To give you insight, and not a small amount of fear, into what these attacks are like “in the wild,” we’re going to take a look at some of the most notable DDoS attacks to date. Our choices include some DDoS attacks that are famous for their sheer scale while our others are because of their impact and consequences.

Amazon Web Services, the 800-pound gorilla of everything cloud computing, was hit by a gigantic DDoS attack in February 2020. This was the most extreme recent DDoS attack ever and it targeted an unidentified AWS customer using a technique called Connectionless Lightweight Directory Access Protocol (CLDAP) Reflection. This technique relies on vulnerable third-party CLDAP servers and amplifies the amount of data sent to the victim’s IP address by 56 to 70 times. The attack lasted for three days and peaked at an astounding 2.3 terabytes per second.

Why the AWS Attack Matters

While the disruption caused by the AWS DDoS Attack was far less severe than it could have been, the sheer scale of the attack and the implications for AWS hosting customers potentially losing revenue and suffering brand damage are significant.

On September 20, 2016, the blog of cybersecurity expert Brian Krebs was assaulted by a DDoS attack in excess of 620 Gbps, which at the time, was the largest attack ever seen. Krebs’ site had been attacked before. Krebs had recorded 269 DDoS attacks since July 2012, but this attack was almost three times bigger than anything his site or, for that matter, the internet had seen before.

The source of the attack was the Mirai botnet, which, at its peak later that year, consisted of more than 600,000 compromised Internet of Things (IoT) devices such as IP cameras, home routers, and video players. The Mirai botnet had been discovered in August that same year but the attack on Krebs’ blog was its first big outing.

The next Mirai botnet attack on September 19 targeted one of the largest European hosting providers, OVH, which hosts roughly 18 million applications for over one million clients. This attack was on a single undisclosed OVH customer and driven by an estimated 145,000 bots, generating a traffic load of up to 1.1 terabits per second, and lasted about seven days. But OVH was not to be the last Mirai botnet victim in 2016…please see the next section.

Why the Mirai Krebs and OVH Attacks Matter

The Mirai botnet was a significant step up in how powerful a DDoS attack could be. The size and sophistication of the Mirai network was unprecedented as was the scale of the attacks and their focus.

Before we discuss the third notable Mirai botnet DDoS attack of 2016, there’s one related event that should be mentioned: On September 30, someone claiming to be the author of the Mirai software released the source code on various hacker forums and the MiraiDDoS platform has been replicated and mutated scores of times since. 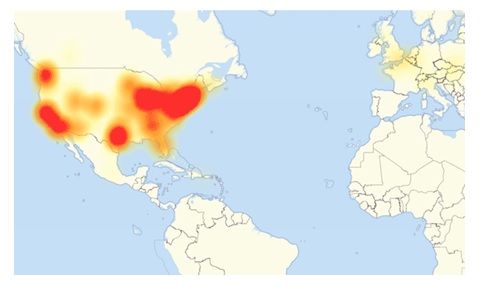 On October 21, 2016, Dyn, a major Domain Name Service (DNS) provider, was assaulted by a one terabit per second traffic flood that then became the new record for a DDoS attack. There’s some evidence that the DDoS attack may have actually achieved a rate of 1.5 terabits per second. The traffic tsunami knocked Dyn’s services offline rendering a number of high-profile websites including GitHub, HBO, Twitter, Reddit, PayPal, Netflix, and Airbnb, inaccessible. Kyle York, Dyn’s chief strategy officer, reported, “We observed 10s of millions of discrete IP addresses associated with the Mirai botnet that were part of the attack.”

Why the MiraiDyn Attack Matters

Mirai supports complex, multi-vector attacks that make mitigation difficult. Even though the Mirai botnet was responsible for the biggest assaults up to that time, the most notable thing about the 2016 Mirai attacks was the release of the Mirai source code enabling anyone with modest information technology skills to create a botnet and mount a Distributed Denial of Service attack without much effort.

On March 12, 2012, six U.S. banks were targeted by a wave of DDoS attacks—Bank of America, JPMorgan Chase, U.S. Bank, Citigroup, Wells Fargo, and PNC Bank. The attacks were carried out by hundreds of hijacked servers from a botnet called Brobot with each attack generating over 60 gigabits of DDoS attack traffic per second.

At the time, these attacks were unique in their persistence: Rather than trying to execute one attack and then backing down, the perpetrators barraged their targets with a multitude of attack methods in order to find one that worked. So, even if a bank was equipped to deal with a few types of DDoS attacks, they were helpless against other types of attack.

Why the Six Banks Attack Matters

The most remarkable aspect of the bank attacks in 2012 was that the attacks were, allegedly, carried out by the Izz ad-Din al-Qassam Brigades, the military wing of the Palestinian Hamas organization. Moreover, the attacks had a huge impact on the affected banks in terms of revenue, mitigation expenses, customer service issues, and the banks’ branding and image.

On Feb. 28, 2018, GitHub—a platform for software developers—was hit with a DDoS attack that clocked in at 1.35 terabits per second and lasted for roughly 20 minutes. According to GitHub, the traffic was traced back to “over a thousand different autonomous systems (ASNs) across tens of thousands of unique endpoints.”

The following chart shows just how much of a difference there was between normal traffic levels and those of the attack.

Even though GitHub was well prepared for a DDoS attack their defenses were overwhelmed—they simply had no way of knowing that an attack of this scale would be launched. As GitHub explained in the company’s incident report: “Over the past year we have deployed additional transit to our facilities. We’ve more than doubled our transit capacity during that time, which has allowed us to withstand certain volumetric attacks without impact to users. Even still, attacks like this sometimes require the help of partners with larger transit networks to provide blocking and filtering.”

Why the GitHub Attack Matters

The GitHub DDoS attack was notable for its scale and the fact that the attack was staged by exploiting a standard command of Memcached, a database caching system for speeding up websites and networks. The MemcachedDDoS attack technique is particularly effective as it provides an amplification factor – the ratio of the attacker’s request size to the amount of DDoS attack traffic generated – of up to a staggering 51,200 times.

The multi-day PopVoteDDoS attack was carried out in 2014 and targeted the Hong Kong-based grassroots movement known as Occupy Central, which was campaigning for a more democratic voting system.

In response to their activities, attackers sent large amounts of traffic to three of Occupy Central’s web hosting services, as well as two independent sites, PopVote, an online mock election site, and Apple Daily, a news site, neither of which were owned by Occupy Central but openly supported its cause. Presumably, those responsible were reacting to Occupy Central’s pro-democracy message.

The attack barraged the Occupy Central servers with packets disguised as legitimate traffic and was executed using not one, not two, but five botnets and resulted in peak traffic levels of 500 gigabits per second.

Why the Occupy Central Attack Matters

It was reported that the attackers were probably connected to the Chinese government, there has never been conclusive proof and, perversely, the attack could have been intended to make the Chinese government look bad. The attack may have also provided cover for hackers who managed to extract Occupy Central staff details from a database to mount an extensive subsequent phishing campaign.

In 2014, CloudFlare, a cybersecurity provider and content delivery network, was slammed by a DDoS attack estimated at approximately 400 gigabits per second of traffic. The attack, directed at a single CloudFlare customer and targeted on servers in Europe, was launched using a vulnerability in the Network Time Protocol (NTP) protocol which is used to ensure computer clocks are accurate. Even though the attack was directed at just one of CloudFlare’s customers, it was so powerful it significantly degraded CloudFlare’s own network.

Why the CloudFlare Attack Matters

This attack illustrates a technique where attackers use spoofed source addresses to send fake NTP server responses to the attack target’s servers. This type of attack is known as a “reflection attack,” since the attacker is able to “bounce” bogus requests off of the NTP server while hiding their own address and due to a weakness in the NTP protocol, the amplification factor of the attack can be up to 206 times, making NTP servers a very effective DDoS tool. Shortly after the attack, the U.S. Computer Emergency Readiness team explained NTP amplification attacks are, “especially difficult to block” because “responses are legitimate data coming from valid servers.”

In 2013, a huge DDoS attack was launched against Spamhaus, a nonprofit threat intelligence provider. Although Spamhaus, as an anti-spam organization, was and still is regularly threatened and attacked and had DDoS protection services already in place, this attack—a reflection attack estimated at 300 gigabits of traffic per second—was large enough to knock its website and part of its email services offline.

Why the Spamhaus Attack Matters

The cyberattack was traced to a member of a Dutch company named Cyberbunker, which had apparently targeted Spamhaus after it blacklisted the company for spamming. This illustrates that companies and or rogue employees can mount DDoS attacks with immense brand damaging and serious legal consequences.

Even though new types of Distributed Denial of Service attacks appear frequently, A10’s Thunder Threat Protection System (TPS) employs advanced defense strategies that protect against all kinds of cyberattacks including new, novel DDoS attacks that could bring down your online and in-house services.

The author is Senior Director of Product Marketing, A10 Networks

Global organizations are struggling to maintain consistent application security across multiple platforms, and they are also losing visibility with the emergence of new architectures and the adoption...
Jan 25, 2021
413
0